VIABLE SOLUTIONS FOR DESIGNING COMMUNICATION WAYS IN HARMONY WITH THE ENVIRONMENT 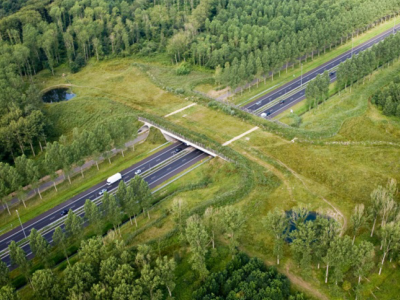 In the current context of the development of the infrastructure network at national level, the impact manifested by this tendency on the nature and its components becomes more and more pronounced. It is necessary to identify a balance between socio-economic developments, on the one hand and biodiversity conservation, on the other.
In preparation for the assumption of the compliance with the ecological network of Natura 2000 protected natural The Groene Woud Ecoduct from the Netherlands                 areas by Romania starting with 2007, it is necessary to take into account the need to protect the floristic and faunistic diversity of community interest when carrying out any infrastructure project on the territory of the country.In this respect, the provisions of the European directives were transposed into the national legislation through the Government Emergency Ordinance no. 57/2007 regarding the regime of the protected natural areas, the conservation of the natural habitats, of the flora and wild fauna, approved with modifications and completions by Law no. 49/2011, as subsequently amended and supplemented.

2.The barrier effect and habitat fragmentation

By carrying out a highway project that runs through a forest body, two separate forest bodies will result, and the wild fauna species, whose territory occupies large dimensions (examples) will be tempted to cross the anthropic structure, in search of new territories, food, reproduction and shelter (fig. 1). This leads in time to the inevitable occurrence of accidents resulting in the loss of human lives, in some cases, in addition to diminishing wild fauna. Therefore, it is vital to identify solutions to ensure the permeability of wild fauna species from the feasibility study phase. 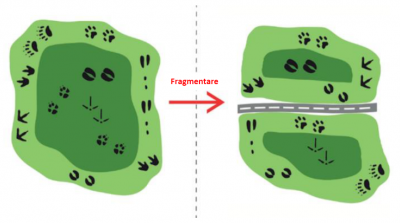 In the absence of a thorough knowledge of an infrastructure project in interaction with the species of flora and fauna in the crossed area, no correct and concrete measures can be issued to reduce the impact caused by the execution of the works and the commissioning of the works. Therefore, it is absolutely necessary to involve a team of specialists in such projects, which will implement a series of monitoring methodologies and protocols for each component of the biodiversity (habitats, invertebrates, ichthyofauna, herpetofauna, avifauna, mammals and chiropractors). Only in this way can all the forms of impact produced by the realization of the project be correctly identified and evaluated and appropriate measures can be formulated to reduce the impact generated.
It should also be emphasized the role of the competent authorities for environmental protection, namely that of verifying the environmental studies, respectively of monitoring and control of the projects in progress.
Infrastructure projects such as expressways, railways or express roads represent permanent barriers for wild fauna species, causing the fragmentation effect, in the absence of the implementation of constructive measures that allow the overpassing and/or subversion of the communication path by them.
In terms of specialty, one gets in the situation where the “permeability” of the wild fauna species is prevented, that is, they block their possibility to move freely on the natural territory.
A number of experiments have shown that most animal species are affected by the presence of a communication pathway. Thus, invertebrates such as beetles and spiders are blocked by a road of small width (2.5 m), wider roads being a problem in the way of larger animals, such as micro-mammals. The probability of the latter crossing 6-15 m wide roads with reduced traffic is less than 10% of that of the species refuge in adjacent habitats [2].
Therefore, it can be concluded that road width and traffic density are the determining causes of the barrier effect, if no specific rules are observed. The persistence of such a barrier may cause genetic changes over time in animal populations in the affected area.
Also, the cumulative impact with all projects in the analyzed area must be taken into account, in order to prevent and reduce the “bottleneck” effect, that is, to strangle the evolution of the population of  some species by preventing their reproduction. Figure 2 illustrates this phenomenon by means of a cylinder whose width represents the size of the population at a given time, and the colored 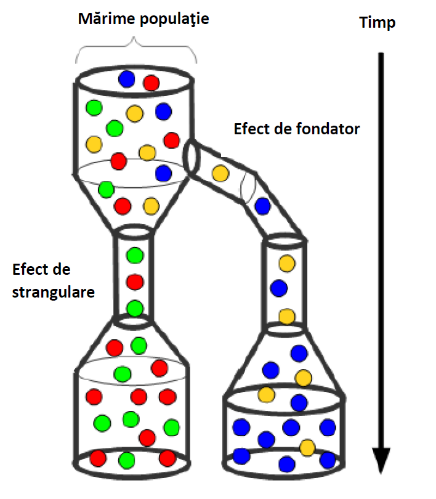 
3. Solutions for designing communication paths in harmony with nature

A proper approach should start with a thorough mapping of the area of implementation of the proposed project, in relation to natural habitats, ecological corridors and wild fauna populations. If the selected design solution cannot avoid environmentally sensitive areas, measures to reduce or compensate the impact created can be applied.
An important argument also refers to the reduced financial effort of some specific works for wild fauna protection. For example, the cost of building special crossings for wild fauna does not exceed approx. 7-9% of the total costs associated with the execution of an infrastructure project [4].
The direct costs associated with the collisions of the means of transport with the animals include the costs of repairing the vehicles, collecting the leashes and cleaning the road, as well as the medical costs involved. The indirect costs are not easily quantifiable, as it is mortality among animal species, but also the result of serious injuries and even death among humans. In the United States, expenses associated with road accidents caused by contact with wild fauna were estimated at $ 146 million in 2001 [5].
The execution of such works in the phase of exploitation of the communication channels is extremely difficult and, as a result, their cost increases considerably. Price reduction can only be done through complex and efficient impact studies in terms of field applicability.
At European level, continuous efforts are being made to implement a rigorous and carefully designed system of communication paths in harmony with nature. For example, we can mention the Netherlands, which built the first overgrowth for wild fauna (called “ecoduct”) in 1988, and currently has at least 47 such ecoducts built throughout the country. They are designed for all species of fauna, including amphibians (frogs, salamanders, tritons) – for example, the Groene Woud Ecoduct was designed to connect two wetlands that are breeding habitats for amphibians and to avoid the phenomenon of fragmentation and barrier produced by a highway. As basic dimensional elements [6], it has a length of 65 m, a width of 50 m and a building height of 7 m respectively. The access ramps have a length of 110 m (west), 85 m (east ) and a slope of 1:14, respectively, 1:10. The soil used is from the work area, and in the lateral areas, transversely on the highway, 2.5 m high earth dams were built, to reduce the negative impact caused by light and the noise generated by traffic. 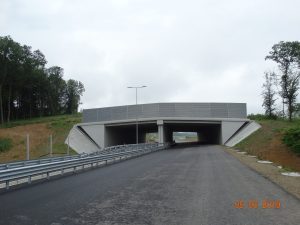 In our country, the first project that included permeability solutions for wild fauna was the Lugoj-Deva highway, along which important crossing areas were identified that were necessary for mammal species, including large carnivores. (fig. 4).
The Environmental Agreement issued by the National Agency for Environmental Protection for the “Lugoj – Deva Highway Section” project included the need for 3 ecoducts in the sector between km 27 + 620 – km 56 +    Fig. 4 Ecoduct built on the Lugoj-Deva highway route, lot3  220, in order to ensure and maintain the permeability of the species, so that the route of the highway has been optimized in this regard [7, 8]. The constructive solutions for the realization of ecoducts in our country have the role to avoid fragmentation of the species habitat and to maintain their permeability within the ecological corridor that connects the Apuseni Mountains with the Southern Carpathians

The planning, conservation, management and design of environmentally friendly communication paths are both technical and social challenges. This is not so much a problem because of the increased mortality of animal species, but rather as an ecological barrier for all wild fauna species, including invertebrates, amphibians, reptiles, birds and micromammals.
In a country with a wealth of wild fauna such as Romania, it is of great importance to identify critical areas, where the fragmentation phenomenon presents a high risk.
Increased habitat fragmentation will then inevitably lead to high costs for restoring ecological corridors and wild fauna populations. Therefore, the correct way is to implement measures from the feasibility stage of a project, to avoid the unfavorable consequences of constructive, financial and traffic safety caused by ignoring this aspect.